Following our previous coverage of Royal Air Maroc‘s (RAM) refutation of P2F collaboration, despite already proven deals, the time has come to probe the existence of its ties with the rampant cartel involving P2F advocate Baltic Aviation Academy (BAA).

“Slanderous allegations aired on the “Pièces à conviction” TV show. [BAA’s] claims according which [our] company resorts to foreign pilot training without “requiring prior evaluation”, are untrue [as we] never collaborated with [them] […] The producers relied on a bogus testimony to bolster erroneous conclusions [so we] will sue”_source

BAA Projects Manager Renata Kudabaitė, prior the release of the TV show. We enhanced authentication with the provision of Ms Kudabaite’s business card collected on site (both recto and verso):

“Regarding your questions: You are right, [€62,5k for RAM] are only for line training […] during [which] there is no salary […] To start any of [these] programs, pilot needs to have TR already […] For […] RAM and Vietjet, pilots can apply with TR from other ATO’s [than BAA]”.

Comes the story of John.

Instead of accepting a P2F proposal with Blue Air in Romania, John, B737 Type Rated at BAA’s in july 2014, settled for 500 hours with RAM like 27 other pilots, as shown in his communication with BAA Project Manager Ingrida Reket:

BAA “received [John’s] contract” after having sent “some questions regarding it with Air Maroco” and letting their “lawyer[s] […] checking the contract“.
Pilots can also come from AviationCV, the advertising platform (50 hiring partners)…
… and benefit from loans via Cypriot Pilot Management Services (PMS – known for blackmailing pilots) as these documents attest in a deal with Small Planet Airlines, also owned by ASG until 2013.

BAA’s Project Managers, such as Mrs Reket (L) & Mrs Kudabaité (R), relay necessary communications to the pilot…
…under the supervision of their Deputy Sales Director, at the time of John’s agreement, a Simon Portnoj.

The tripartite 1st agreement involves the pilot with Tritar Consulting Services (TCS), a firm based in Sousse, Tunisia, to which is due a downpayment of €27.5k prior starting ground school…
…TCS being led by Tritar Mansour (that John met Jan.3 2015 in Casablanca), a Sousse local personality (former Rotary club President) and Flight Administration Manager of low cost Nouvelair.
The 3rd party in the 1st agreement is administrated by Zied Zerelli, a former Deputy Consul of the Tunisian Ministry of Foreign Affairs, namely…
…Type Line Training (TLT), registered in Casablanca, Morocco, to which €10k is due upon airline enrollment, another €10k prior starting the sim sessions and €8k after the first flight.

The 2nd agreement is between TCS and Royal Air Maroc. The airline “enrolls” John by screening his titles and selling the flight hours as training.
Another Sousse LLC registered in sept. 2011 was officially aquired by TCS in July 7 2015: Type and Train (TT), that also provides p2f pilots…
… and works “very closely” with Brookfield Aviation, Ryanair‘s former p2f dealer, selling the job worldwide to this day.
Thus, Tunisair also makes pilots pay to work since 2012 (at least), as shown in a contract edited by Mr Tritar, where 300h sold 56,950€.

RAM then uses CasaAero, its 2005 joint venture with Boeing Flight Training (a Boeing subsidiary) where ground school and sim sessions are performed.
Mr Tritar already working for Nouvelair, it is no surprise TT sells them p2f, as was done as early as 2012 as shown here and there for €62,5k and €59,65k respectively.
Along with Karthago Airlines, also from Tunisia…
…the 3 Tunisian airlines founded ATCT in April 2005 with 2 banks (BH et BNA), EASA TRTO granted in oct.2010, notable stockholders Thales and Airbus, processing P2Fers within this facility.

Since 2012 at least, RAM express also sold 500 work hours €14k via the Toulouse base of the Hong-Kong-registered Malaysian ETOPS LTD

John met CasaAero Technical Director Abdel Ilah Zamrane, that coordinated his ground courses between Jan.6 and 17 2015, a test on Feb.4, other courses between Feb.11 and 23, and the final exam the 23. The sim check didn’t take place until May 19. Due to several delays, John rated Mr Zamrane’s services as “disorganized, disrespectful and unprofessional“.
ATCT gave rise to indivuals like Tarek Benaissi, Quality Manager and contact of the firm. He can be seen “pimping” pilots for Qatar Airways, on social networks here and there, and “recruiting” platforms such as DirectaeroJobs for Lybia or even… on AviationCV of course (see above) !

At this point, every middle man providing no discernible services whatsoever, walks away with a commission… except for the actual pilot. Mercifully, we omitted the involvement of RAM with EagleJet, yet another P2F broker… 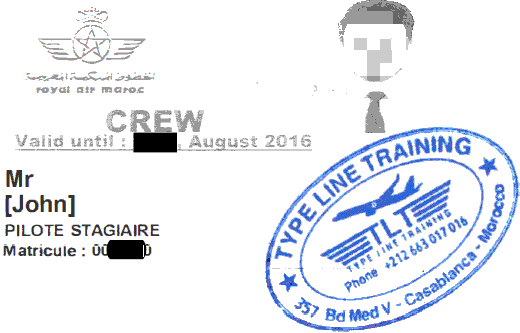 Worst, by May 19,
John and his colleagues waited for
their moroccan licences, badges, uniforms
and be transfered from CasaAero to RAM. One last training day took place in June 9, after which flights were supposed to happen. Mr Tritar tried to reassure his “customers” in June 12, only for John to figure out in Aug.25 only 3 or 4 Captains were willing to fly with them.

Disgusted, John left RAM in Aug.26, 2 pilots having left already with 6 others to follow a few months later. Over 27 pilots, only 3 had their agreement honored and flew with RAM. Judiciary action was attempted but rebutted.

In an industry infested with parasites (such as P2F father Thomas Cooper, disreputable Jean-Marc Bollinger, delusional Michael Hickey, infamous Stephane Hoinville), a sad day has come when a national airline covertly indulges in villainy with pimps and racketeers of that ilk.

In the hubristic exercise of denial that followed, RAM flushed its credibility down the toilet, while the truth remained like the feces that wouldn’t.

Edit June 10th: “to put out the fire, RAM had to halt their P2F, grounding several of their aircraft“_Source